Located in downtown Vancouver, BC, Canada, a 44-story hotel was designed by James KM Cheng, just blocks from the Pacific Ocean.  Zahner became involved when the architects opted for a perforated screen system which would disguise the first few floors of office and parking structures, while allowing light and air to enter through the thousands of tiny perforations.

What sets this perforated screen apart from standard fare is its unique surface design, a patterned perforated and bumped texture which subtly glistens across the surface. Architects wanted to solve two problems with one solution: creating a parking garage with an open air-flow, and an artistic facade surface that reflected the building’s natural surroundings.

Using Zahner’s patented ZIRA system, architects supplied Zahner with a photograph of the surrounding forest.  The image was transferred onto the metal using perforations and dimples in the stainless steel. All across the building’s structure, trees create vertical lines running up and down the facade, and the forest emerges.

Translating the Image to Metal

The architect supplied a photograph of redwood trees taken in the surrounding nature of Vancouver, pictured below. The image was translated using software originally developed by Zahner for the de Young Museum in San Francisco.

The translated image data was applied across the metal surface algorithmically to account for panelization. Each of the perforated metal panels is designed with metal flange details that the ZIRA™ Process had to account for in the process of translating data. The image flows seamlessly across these panels and around the building’s corner edges.

The architects wanted to create a rippled effect with the metal, to create a surface both luxurious and functional. Using the ZIRA Process enables the architect to create this surface at a cost not much higher than a uniformly perforated surface.

No panel is the same, and the pattern never repeats itself across the stainless steel surface. Both the perforated surface as well as the bumped and dimpled texture were produced using a system of CNC-controlled punches and dies. 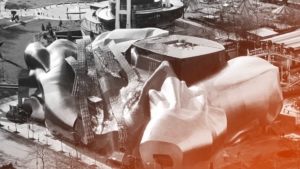 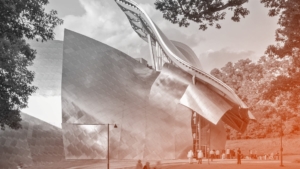