The Endless Curiosity and Prolific Works of Jan Hendrix

A Unique Blend of Botany, Art, and Architecture

When encountered up close, or even from a distance, the fractal compositions of Jan Hendrix have a mesmerizing effect.

These infinitely complex patterns featured in books, paintings, etchings, and architectural metal installations – though static – have a sense of life and dynamism to them. Just like their botanical sources of inspiration, that can transfix even the most casual observer.

Classically trained as a printmaker and graphic artist, the Dutch-born Hendrix, based in Mexico City since 1978, has travelled the world pursuing the experiences, cultures, and training that have influenced his work.

Since the early 2000s, Hendrix has been a frequent collaborator of numerous international architects, working in metal on such high-profile projects such as the Art Wall at Doha, Patio de las Jacarandas, and The Mexican Museum of San Francisco.

When metal is used as the medium for his designs, Hendrix works with Zahner.

“In my experience, there’s no company better than Zahner when it comes to working on complex metal projects for art and architecture,” Hendrix said. “There’s never any doubt in my mind about Zahner’s engineering, quality, delivery or installation. I’ve trusted them with nearly 20 of my commissions over the years and they always come through.” 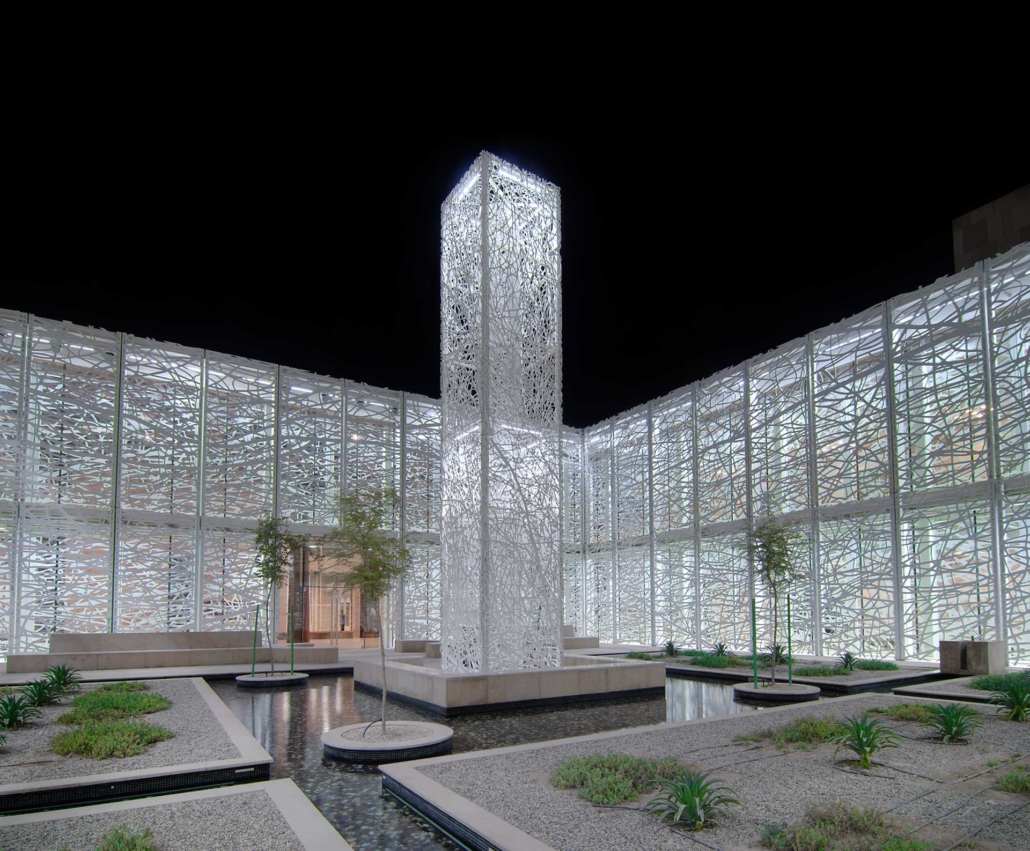 Keeping Calm and Designing On

Hendrix continues to use botany as one of his primary sources of inspiration in his large-scale architectural commissions, most recently seen in projects for The Pembroke Hill School in Kansas City, Mo., and the 2100 L Street building in Washington, D.C.

Botanical patterns have become his calling card and a style he’s become recognized for worldwide. The stems, leaves and flowers of plants not only require tremendous patience and precision to draw, but they also require a special expertise to cut, polish and fabricate.

“Even when working on the most complex designs, I appreciate the quiet determination and calm demeanor of the Zahner team,” Hendrix said. “No matter what the design challenge may be, I know they have the architectural talent and engineering expertise on staff to work through anything. Zahner listens carefully and proposes thoughtful and elegant solutions when we need them.” 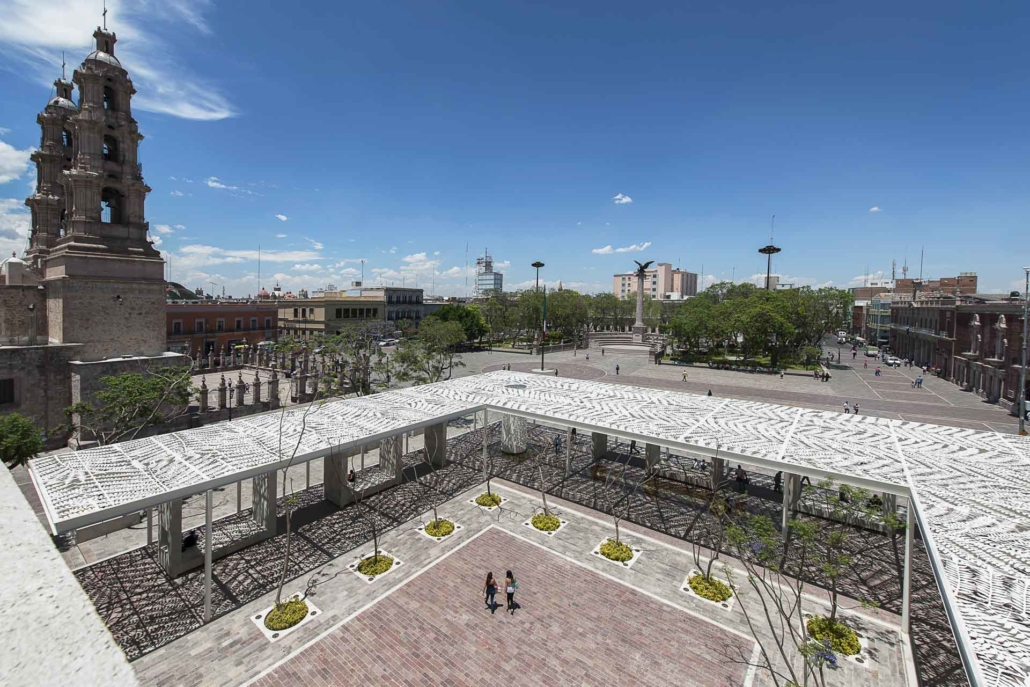 THE PATIO DE LAS JACARANDAS PROVIDES A PLACE TO GATHER IN AGUASCALIENTES.

The Patio de las Jacarandas provides a place to gather in Aguascalientes.

Over the course of its 125-year history in architectural metal manufacturing and fabrication, Zahner has developed an appreciation and understanding of realizing conceptual designs using large-scale modern metal materials. The Hands of the Artist team at Zahner work in partnership with artists to ensure design intent remains throughout the engineering and fabrication process.

Over the last two decades, Zahner has produced hundreds of artworks of every scale, in a wide variety of mediums, for emerging, as well as established artists like Hendrix.

It’s easy to see why Hendrix has bonded with the team at Zahner. Shared perspectives on work ethic, creativity, innovation, and accuracy are the fundamental underpinnings of a personal and professional relationship now well into its second decade.

“Zahner is always willing to explore and experiment and push the boundaries of what’s possible,” Hendrix said. “They’re never afraid of new ideas, they’re always looking for ways to improve upon them, and they keep iterating until we find the best solution. I think they’re extraordinary.”

Bill Zahner, CEO of Zahner, recently sat down with Jan Hendrix to discuss his creative process, his works, and their numerous collaborations over the past 15 years. Watch the 2-minute preview featuring highlights of their conversation. 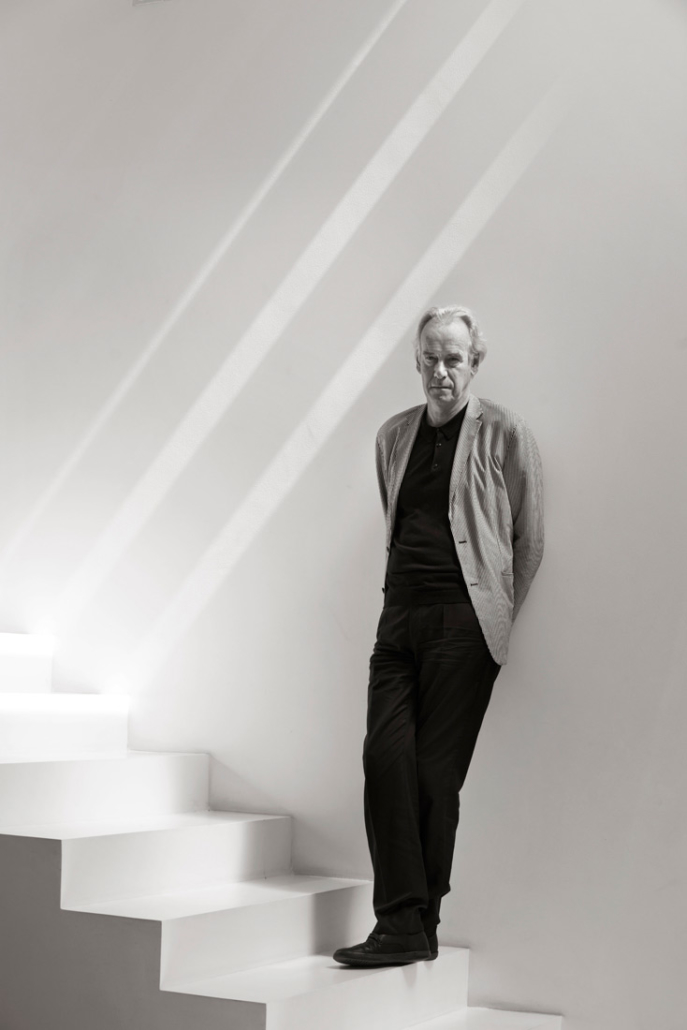 Internationally renowned visual artist Jan Hendrix has cultivated a reputation for originality and inventiveness that has earned his work a place in some of the world’s most discriminating public and private art collections. When his designs require architectural metals and fabrication, Hendrix collaborates with Zahner for its innovation, engineering, and relentless pursuit of excellence.

Thinking ‘Inside the Box’ next 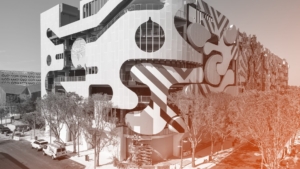