Making of the Memorial

Zahner’s Gary Davis talks about how the Libeskind-designed Ohio Holocaust and Liberators Memorial was fabricated.

Today at the Ohio Statehouse in Columbus, the Ohio Holocaust and Liberators Memorial, designed by Studio Daniel Libeskind was dedicated. It is the second memorial of its kind in the United States. Iowa constructed the first Holocaust memorial on state-owned land on October 23, 2013.

Zahner served as design-engineering, fabrication and installation, and also served as the general contractor for the project, bringing on Turner Construction to manage the site and ground operations for the memorial.

Zahner’s Marketing Director Gary Davis was interviewed by the Ohio Government Television Station for a video which aired during the dedication on the Statehouse grounds. “The Making of A Memorial” video features images and video with a reading by Daniel Libeskind. Also interviewed from the construction staff was Robert Loversidge of Schooley Caldwell Associates who serves as the Statehouse Architect and Edward Alford of Turner Construction Company.

Below is an excerpt of the video. Watch the video in its entirety on the Ohio Public TV website.

“People will have the opportunity to contemplate the memory of the dead, celebrate those who survived and came to Ohio and appreciate the liberators who helped free victims from camps and end the war,” Garver-Keller said.

Mr. Libeskind, son of Holocaust survivors, designed the $2.2 million structure. His buildings include the Berlin Jewish Museum, the Royal Ontario Museum in Toronto and the reconstruction of World Trade Center in New York City.

Cleveland Marble Mosaic Co. built the stone wall on the edge of the path leading up to the monument, carved the inscriptions on the wall and installed it.

Learn more about the memorial and its conception at Studio Daniel Libeskind. 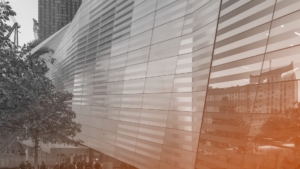 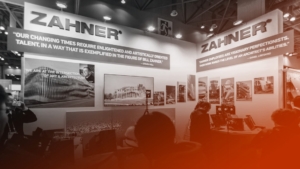