In the early 2000’s, Zahner worked with Steven Holl to design and manufacture a building envelope roof and wall system for the Turbulence House. The residence was made for artists Mei-Mei Berssenbrugge and Richard Tuttle, who had two versions of the building made: one for their property in Abiquiu, New Mexico; and one for an exhibition at Basilica Palladiana in Vicenza, north-eastern Italy.

Steven Holl likens the design to “the tip of an iceberg indicating a much larger mass below. The form allows turbulent wind to blow through its center." The stressed skin and aluminum rib construction was digitally prefabricated in Kansas City and assembled on site in Abiquiu, New Mexico.

In 2013, Architectural Digest covered Zahner’s involvement on the project. In an interview with Richard Tuttle, writer Joseph Giovannini describes the search and discovery of building a custom prefab house:

Berssenbrugge had an idea for building the guesthouse. “She wanted a cutting-edge, prefabricated structure,” says Tuttle. “The parts would be trucked in one day, erected on the next, and guests would be able to move in on the third.”

Berssenbrugge searched the Internet in vain for a solution to her quandary and talked to friends in the architectural world about what she came to call her “midlife crisis.”

Intrigued by the challenge of designing a prefabricated house for artists, one of those friends, New York architect Steven Holl, offered to join the couple in their experiment. It was a labor of love, and the fee-for-service reflected old affinities: Holl agreed to exchange his design for one of Tuttle’s paintings.

These uniquely shaped parts—many of them curved—were bolted to the pad, and then to each other, in a matter of days.

Steven Holl’s design is a small but highly custom sculptural form which contains 900SF of floor space. Zahner was brought into the project early in the design process. Zahner’s relationship with Steven Holl began many years prior when working together on a project for MIT.

This early collaboration gave the team an understanding of how the two firms could collaborate on future projects such as the Daeyang Residence, the Lake Whitney Purification Plant, and here, the Turbulence House.

“We made the structure and skin work together as a unit,” says Holl. The architect collaborated with Kansas City–based A. Zahner Company Architectural Metals, which posted progress reports on a Web site dedicated to the project.

To create the complex skin and structure, Zahner developed the system using ZEPPS, for building curved forms. This process begins in the design, and results in a series of preassembled megapanels—31 in total— which were used to create the building’s form in entirety.

…These uniquely shaped parts—many of them curved—were bolted to the pad, and then to each other, in a matter of days.

…The result, says Tuttle, is “an American house that connects the high and low—it marries the cutting edge and the prefabricated. Steven was surprised that we’d allow him to produce as many as he’d like. We’re not house-proud.” Indeed, last fall a duplicate of the house was stamped out and shipped to Vicenza, Italy, where it was erected in “City to Desert: Density in the Landscape,” a one-man show of Holl’s work that took place in a medieval structure remodeled by Palladio. The event presented three strata of architectural time—medieval, Renaissance and digital.

Read the article in its entirety at Architectural Digest. 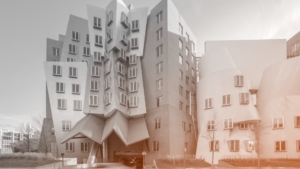