Liverpool Interlomas Department Store is a commercial mall development designed by Rojkind Arquitectos with a Zahner-engineered and fabricated facade system. The new Liverpool Flagship Store is part of the Paseo Interlomas Mall located in the Interlomas neighborhood of Huixquilucan a suburb of Mexico City.

Zahner was selected by Rojkind Arquitectos to design the Liverpool Interlomas Facade because of Zahner’s proven ability to design and produce complex curvilinear forms. The process was efficient, on-time, and under budget, which is a result of the BIM-informed digital manufacturing process.

Even though we had never collaborated with them, Zahner’s credentials and experience clearly indicated that they were the ideal candidate for this project.

The design and fabrication process we went through has been one of the most rewarding collaborations we have had in recent years.

The architecture firm Rojkind Arquitectos won the competition to design the flagship store for Liverpool in Mexico City. Designed and built in just over a year’s time, the project’s fast-paced process was made possible by digital construction processes and having all contractors and fabricators on-board with the Building Information Model (BIM).

In early 2011, Architect Michel Rojkind and his design team met at the Zahner Headquarters in Kansas City. There they worked to define the details with the Liverpool clients, the installation contractor, the structural engineer, the lighting consultant, and Zahner’s own Design Assist Group. The teams worked together to design-engineer an integrated model, and then agreed on a section of that model to be built as a mockup.

The flagship store was produced to rebrand the chain with a contemporary image for its Mexico City shoppers, in the same way that other flagship stores such as the Neiman Marcus in Natick Massachusetts re-established their contemporary presence using architectural forms.

Elkus Manfredi Architects designed the facade's undulations with perspective in mind. When travelers drive by, the structure appears animated and kinetic, an effect caused by the way the facade curves in and out. Zahner worked with the architects to design a curving facade panel system that is both aesthetically powerful as well as economically effective.

Within a matter of weeks, a fully-functional mockup was produced and installed on the Zahner mock-up tower, pictured above. The mockup is a crucial stage of the design process, revealing issues to work out in the final iteration, and helping Zahner engineers and fabricators foresee the more difficult aspects of an upcoming project.

The mockup also assisted other contractors on the job. The installer in Mexico City was able to use the mockup to gain an understanding of how best to assemble and install the final components. Zahner worked with the entire design and ownership team to optimize the fabrication and shipping sequences for efficiency so as to meet the demands of the aggressive construction schedule.

This facade functioned as a design-build project, defined by the Design Assist Group at Zahner. This means that Zahner owned the design of the anchoring and worked with the structural engineer on an integrated design. Using the Design Assist Group also means that from the very onset of the project’s planning stages, a team of intelligent designers and engineers at Zahner were defining the details which would ensure a smooth production and installation process.

After producing the mockup in January 2011, the team made subtle revisions to the project’s 3D model. The Liverpool project then quickly went to operations and fabrication. Code-named Project 7, The Liverpool Project was a fast-paced design, build, and supervised install. In less than a year the project went from drawings and renderings to completion, in November of 2011.

The Design Assist Group at Zahner used the ZEPPS Process to engineer and produce the massive panels which attach to the building’s structure and provide the uniform surface for the Angel Hair Stainless steel skinned surface.

The ZEPPS Assemblies were fabricated and assembled as complete panels in the Zahner Shop in Kansas City, where they were shipped on trucks to the job site in Mexico City. Building the exterior facade with ZEPPS drastically reduces the construction time because the panels simply bolt to existing connections on the steel structure.

The project features a diffused Angel Hair stainless steel material for its exterior an interior cladding. In select areas, the project also features Zahner’s GB-60 Process for bead-blasting stainless steel, and a number of bumped and embossed surfaces can be seen throughout both the interior and exterior surfaces. 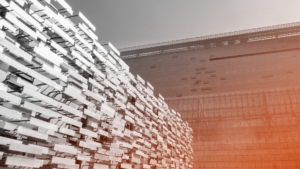 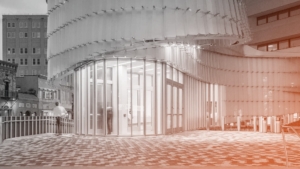