On display from March through July 2006, a sweeping exhibit entitled ‘Continuities of the Incomplete’ was displayed at the acclaimed Centre Pompidou in Paris, France.

The exhibition includes designs by Morphosis and features a Zahner-manufactured aluminum/glass floor and custom guardrail system. Zahner was brought into the project to produce the complex metal system which encases the glass floor as an exportable aluminum and glass system.

The design’s inclining floor encases a series of models, videos, and the entire thought-process of the architects at Morphosis and it’s founder, Thom Mayne. The structural raised floor begins at ground level and gradually raises to two feet. The structure was engineered to withstand the hundreds of people who would traffic the show.

The custom engineered fin structure was designed and produced by a small group of engineers, and the entire floor was shipped to France where it was installed, without ever pre-assembling it in the Zahner facility in Kansas City. Upon delivery in France, the same engineers who designed the structure also erected it, and the aluminum floor came together seamlessly.

Zahner has worked with Morphosis on a number of project. In Oregon, Zahner produced the stainless roof and wall panels on the Eugene Federal Courthouse; in New York City, Zahner provided the custom perforated stainless steel facade for the Cooper Union New Academic Building. See all of the projects completed by Zahner for Morphosis.

DESIGNING AND EXPORTING THE ALUMINUM AND GLASS FLOOR ASSEMBLY

The Morphosis Exhibit in Paris includes a structural raised aluminum and glass floor. The system is on a slow incline, which begins at ground level and gradually raises to two feet. The structure was engineered to withstand the hundreds of people who would traffic the show.

Zahner engineers worked closely with the Morphosis design team to craft a system which would support the weight and provide ease of assembly for the non-technical install team in Paris.

In Kansas City at the Zahner facility, a mockup was erected, which provided insight into the system and confidence in the design plan. The custom engineered fin structure was manufactured as parts, and a small group of engineers installed the project France. The system was entirely built in a digital model and shipped without ever pre-assembling it in the Kansas City facility. There in France, the same engineers who designed the structure also erected it, and the aluminum floor came together seamlessly. 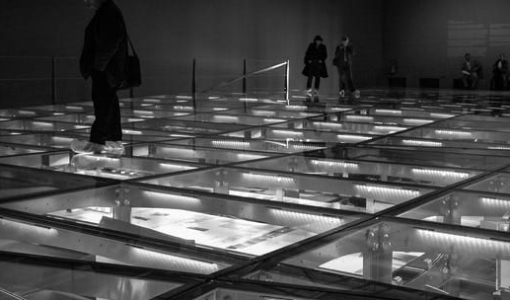 Custom floor system designs by architects and fabricated by Zahner include unlimited possibilities. Zahner works with designers to develop their vision through Design Assist and mockup planning so that the final product produced can be easily installed on time and on budget. 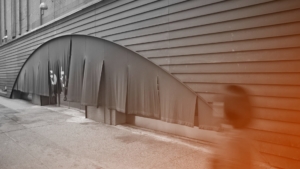 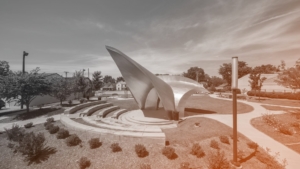