Signage, artworks, and architectural features designed by Luce et Studio are featured throughout the new nine-story San Diego Central Library in downtown San Diego. The features include an illuminated mast which spans four floors on the building’s North exterior, a massive-scale replica of an orchestral bow on the exterior of the ninth floor, and custom signage to celebrate the donor spaces throughout the library.

Throughout the building’s nine stories and exterior spaces are various signifiers, art elements, and architectural features which created to recognize the generous donations made by the philanthropic community in San Diego. The Central Library’s funding is unusual for a civic building, because forty percent of the costs were covered through private fund raising, including the operational costs of running the library. The private support means that the library was built with no new taxes, bonds, or moneys from the city’s general fund.

Luce et Studio’s design for The Mast for San Diego’s downtown Public Library was designed as a 70′ tall aluminum column, whose diameter ranges from 8′ at its top and bottom, and 12′ at its median.

The Mast is constructed in aluminum with varying perforations which run up around its length. Inside of the mast is an interior LED lighting system, which provides a beacon of star-studded lights which illuminates the facade throughout the evening hours. The mast was manufactured by Zahner in Kansas City, and installed by a local team in San Diego.

One of the donors recognized by the Museum is the late Helen Price whose continued philanthropic giving to the museum was recognized by a 30‘ scale orchestral bow to celebrate the San Diego figure’s love for the symphony.

The bow is made using stainless steel and structural cable. Both the bow and the mast were manufactured by Zahner with design support from Wallace Engineering.

At the building’s South entrance are multiple signage elements for the San Diego Library Joan & Irwin Jacobs Common, recognizing the philanthropist team who donated $20 million towards the library’s operational costs.

The technique used to create the building’s southern pedestrian level signage is a signature style developed by Luce et Studio on an unrealized project for Hotel James (pictured below). The signage concept was developed by Jennifer Luce to create a third dimension for the cut-out letter shapes. Zahner manufactures a groove in each of the letters, which allows the letter to then be folded out. The concept was first created years prior, and is featured prominently as a notable signage display for the San Diego Central Library.

One of the themes that moves throughout the entirety of the library is a bar code motif, extruding from the letter forms of various donor plaques and signage elements on both the interior and exterior surfaces of the library. The extruded letter forms also break planes and wrap around columns, walls, and concrete boundaries.

The thick metals used in the custom signage include stainless steel and bronze, and included areas that are painted, as well as areas that let the metal surface shine through, much of which uses Zahner’s Angel Hair mechanical non-directional surface treatment.

One of the final donors donors for the new library, Darlene Shiley placed $1.2 million towards the library’s operational fund, and her donation is honored with a rooftop events suite. The entrance to the space is clad in interference stainless steel, perforated using a custom pattern. The Zahner system used to lay out the decorative metal screen panels is based on the ImageWall/ZIRA system, which also provides for a muted seam where the perforations continue across the joint’s reveal. 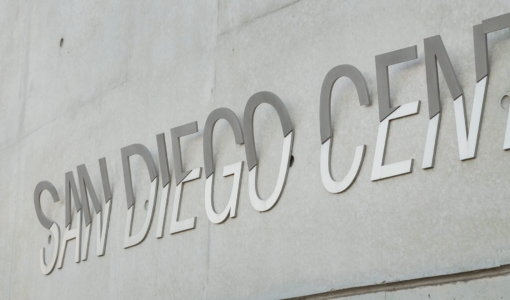 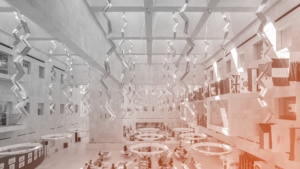 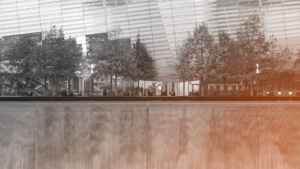