Zahner was brought into the design to develop one of the three artworks devised by Mark McGowan, Art Director for the Exhibit Environments at the Exploratorium:

“My goal was to use the building’s otherwise neutral architectural features to visually display things that would normally be invisible, to express something about the site and what’s there—the tides, the bay water, and the equipment that’s contributing to the museum’s net-zero energy goal—in a visual way.”

Zahner worked with the team to develop the Plankton Wall, a stainless steel artwall which is situated at the Northeast elevation facing the San Francisco Bay.  As part of the Bay Observatory Terrace, the Plankton Wall is a semi-reflective surface showing a randomized grid of what appear to be patterned circles. These circles are abstract versions of sketches initially created by Karli Woodward, Living Systems Technician, of four different types of baywater plankton.

Each of the holes which compose the patterned circles were die-cut in Kansas City, composed of only 6 differently sized punches. The wall’s stainless steel panels were fabricated by Zahner in Kansas City, Missouri. 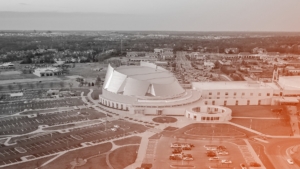 Church of the Resurrection next 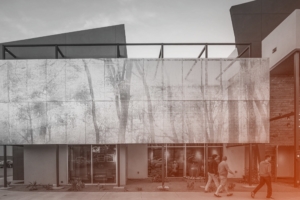