A red curtain displaying traditional Japanese noren hangs in the custom entrance for the Morimoto, a Japanese restaurant in the Chelsea neighborhood of Manhattan. The facade, manufactured by Zahner in Kansas City, brings a custom touch to an otherwise standard shingle. Its blackened zinc patina on galvanized steel is both classic and modern, as is its corrugated facade.

The restaurant, named for and run by Iron Chef Masaharu Morimoto, is designed by Stephanie Goto and Tadao Ando. This upscale Chelsea bar and restaurant is just a few steps from the South end of the High Line Park in lower Manhattan.

Zahner produced the exterior, a blackened galvanized steel corrugating wall with a wide opening for its entrance. The facade’s matte appearance is a feature of its natural patina. The system that Zahner designed with the architecture team uses a face-fastener which add an industrial aesthetic.

Oscura is a Zahner blackened patina on steel that has been developed for interior use. Activated steel surfaces create a mottled and artistic ambiance that varies from sheet to sheet. The primary surface is sealed with a clear coat to mitigate rusting due to the effects of the ambient interior environment. 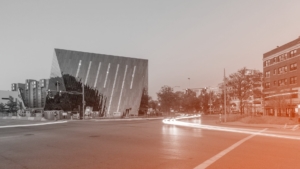 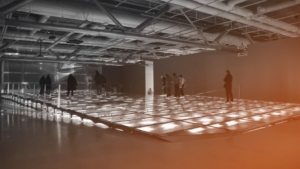