Designed by Frank Gehry Partners for the New World Symphony Orchestra, Gehry’s office was brought in by the client for their past work on musical venues such as the Walt Disney Concert Hall in Los Angeles for which Zahner provided Design Assist consultation.

The New World Center signified a transition for Gehry’s firm. While elements of his signature style can be found in various elements throughout, around, and even on top of the new building, the structure itself is simple.

Zahner’s involvement with the New World Symphony is particular to a architectural metal accent in the atrium of the new building. Zahner used a similar interference metal surface on projects such as Antoine Predock’s Tampa Museum of Science and Industry or Frank Gehry’s Experience Music Project.

However, neither of these projects has quite the blue-green tonality of the architectural canopy produced for the New World Symphony. This is because the material selected for the project is an unusual architectural metal. The project’s interior canopy is made in titanium, a surface which is known for both its expense, and its difficult workability.

*Please note: If you’re interested in working with Titanium, please call to discuss project details. Although we do not keep samples of this material on hand, we are happy to customize based upon your project’s needs.

Creating the Curves of the New World Symphony Bar

This iridescent canopy presents a good example of how ZEPPS can be used to construct smaller architectural elements as well as art and sculpture. ZEPPS enables quick installation because the entire project is pre-engineered for smart installation, and it also provides the architects and artists with a digital model, allowing changes to be made via international conference meetings on the internet.

The New World Symphony Bar Canopy was broken down into buildable sections. Each of these sections is a ZEPPS Assembly, and these sections were small enough that installers could handle assemblies without the use of cranes.

Each of the ZEPPS assemblies was built and pre-connected in the Zahner shop. The ZEPPS forms are pre-skinned with an aluminum sub-surface, and then finished with Titanium skins and sealed in plastic to protect the surface from fingerprints.

The entire bar was pre-assembled at Zahner to test the connections and fit the blue-titanium skin surface. Then the ZEPPS assemblies where separated, packaged, and shipped to the New World Symphony Center construction site in Miami, Florida.

The ZEPPS assemblies were designed to be small enough that interior installers could manage each section without the use of cranes. These assemblies are also lightweight due to the aluminum construction.

After installing the panels, field operators finish edges and connect gaps with additional smaller ZEPPS assemblies with the titanium skins.

Although Zahner was only involved in creating the interior metalwork, one of the most intriguing aspects of the symphony hall is the ongoing outdoor wallcasts, projected videos of performances for the general public. These outdoor events are free to the public, and have created a sense of community among Miami residents. 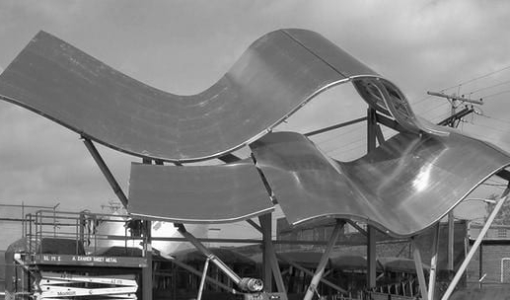 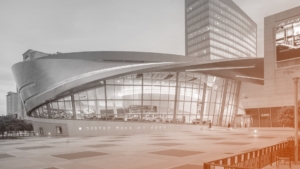 NASCAR Hall of Fame next 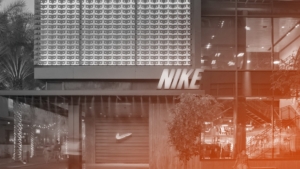