A new copper and stone building rises in downtown Cincinnati, an icon in its own right in the midst of other grand architectural works such as Libeskind’s Ascent at Roebling’s Bridge and Zaha Hadid’s Rosenthal Center.

The Freedom Center features copper flat seam wall panels and associated flashings. The material was installed as raw copper panels and allowed to age naturally. This authentic process meant that the bright red copper quickly developed a dark reddish-brown patina, which will mature into its final form of light blues and greens. The museum is an affiliate of the Smithsonian Museum, which means that the Freedom Center has access to the immense stored collection of The Smithsonian.

The architectural team for the Freedom Center was designed by BORA with Blackburn Architects. Design of the new building began in 1998, broke ground in 2002, and was completed in 2004.

Dirty Penny copper is a premium surface developed by Zahner to provide artists and architects with a stunning architectural surface unlike any other. The preweathered copper features light and dark tones ranging from blues to greens and reds.

The location of the project is just north of the Ohio river, a significant location noted by Brian Libby in the Metropolis Mag:

‘When escaped slaves made their way north to freedom along the Underground Railroad, the Ohio River was a place to celebrate a bit before continuing on. Ohio law banned slavery, but superseding federal law allowed whites to re-capture slaves that had crossed the river and return them to Southern slave owners. As a result, most slaves using the Railroad continued further north.’

The notion of continuing on can be seen in the design of the building, as curving paths cut through the north/south axis of the building, further emphasizing the continued movement for freedom and social rights.

“It takes courage to place a monument to racial harmony and diversity at the doorstep to your city. We had the nerve to do that.” — New York Times, Bruce Webber, August 01, 2004.

“One of my big concerns was that we’d be overshadowed by the stadiums,” says Freedom Center CEO Ed Rigaut. “But the museum really stands tall. I’ve even heard a few people comment that, in a way, we dwarf the stadiums.” — Metropolis Magazine, October 1, 2004.

”I see a museum not as a place that limits our vision, but one that enhances our vision. Museums have traditionally not taken a transformative role, but that’s changing. The Freedom Center, like our museum, can ask itself, ‘Why did we build this?’ Not just to look back, but to shape a different present and future.” — Cincinnati Enquirer, Krista Ramsey, August 1, 2004. 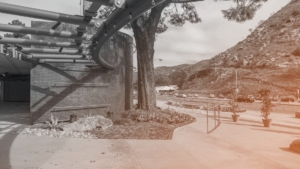 Festival of Arts next 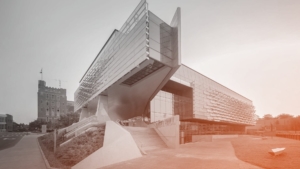